Has anyone migrated to wpForo from WP Symposium?  If so, what steps did you take?  Is there a map of the database info for wpForo if I need to do it myself?  Thanks, all!

I've made a lot of progress on this and I'll be happy to share what I've done once it's finished.  A couple remaining issues:

Thanks for your help!

I'm sorry but there is no migration tool for this yet. You can ask ProfProjects GP for professional migration services: http://profprojects.com/migration-services/#forum

1. On the main forum page everything says it was posted by Anonymous.  When I click through to the forums and posts it all looks right, assigned to the right users.  I saw this once before and then it cleared itself up, so I think it's cache related.  I don't have caching turned on, and I've cleared the wpForo caches.  What else should I do?

You should disable other cache plugins for forum page and enable wpForo cache options (except HTML cache) in Dashboard > Forums > Settings > Features admin page. Then open check your database > _wpforo_forums table and make sure the last_userid  are not empty. This is the reason why you see Anonymous usernames. The last userid-s should also be properly migrated.

2. I've copied user avatars from the old system to the new directory and added the links to them to the wpforo_profiles database table.  They're not getting picked up, though, and showing as broken images.  Are there other steps I need to do to get them to work?

The last_userid looks right and I've deleted caches (this is development and I don't have caching enabled) and it's still saying Anonymous.  I'm having a tough time getting avatars to show up, too.  I might have to wait it out.

I don't think so. Something is 100% wrong with that. Either there is no id in this field  or there is no User with these IDs in _users and _wpforo_profiles table.

I double checked and user IDs are correct in all three tables.  With that said, my development site is a little flaky at times so I'm working under the assumption that is the problem.  I'll let you know how it goes in production after the migration.

I missed setting the last_post field in the wpforo_topics table -- as soon as I set that it worked.  That issue is resolved.

I'm still not able to add avatars for the 178 people who added them in the old system.  Here's a new symptom.  When I upload an avatar (confirmed to be working in Windows) to /wp-content/uploads/wpforo/avatars and then I set the URL in wpforo_profiles it shows up as a broken image.  The new symptom is that I also cannot load it by going to its URL, even though it exists.  If I upload an avatar through the wpforo utility on the front end, I can load it by going to its URL.  I have no idea why, but I get a 404 error when I try to load manually FTP'd images.

I've seen this before when building a completely different utility, so it's probably not wpforo.  I'm hoping someone out there has seen this before and has some tips, because I have no idea why that's happening.  I'm researching.

Would you like the script I used to migrate from WP Symposium?

I've got this issue posted at  https://wordpress.org/support/topic/some-images-giving-404-errors/ too, if anyone's following this topic.

Also please make sure the folder permissions are 755 and files are 644 in file system: 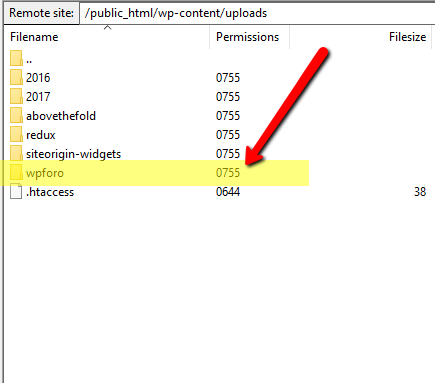 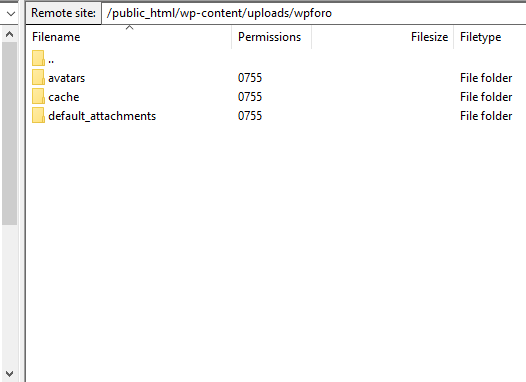 Do you think caching would prevent me from directly calling images?  What would be the difference between an image uploaded by wpForo and an image I FTP into the same directory?  Do wpForo images get cached on upload, or is there some other thing happening behind the scenes for those?  I'm having a hard time wrapping my head around it.  Thanks for walking me through this.

Please let me know if your issue is fixed. if not please send admin login details to support[at]gvectors.com email address. Also provide with some examples of avatars.

I haven't been able to fix it.  I'll send that email, thanks.