Really, really loving wpForo. With the most recent 1.4.6 release announcement including some BuddyPress improvements, I thought I'd install BP and give it a go. I've been wanting to include some social activities into my https://rplstoday.com website anyway, so it was good timing.

I have also noticed these issues described above.  Additionally we have these very urgent issues:

1.  We see that posts are populating in buddypress.  However when we reply it does not post in wpforo back. Is this unintended?

2.  We have forums that are hidden/private that are actually posting for all to see in buddypress.  Is there a way to not post to buddypress based on forum access rule?

So far these are the two major issues that we assume will be common for all who use the platform.

@wendell - I too am playing with BuddyPress after deciding to move away from Ultimate Member ($$$). I've not noticed the same issue as you though but that's probably because I've installed the Nouveau pack for BuddyPress which can be found here

Download the ZIP from the Git repository, and then upload to your WordPress site as a plugin. Once installed and activated, you just go to Settings -> BuddyPress -> Options -> Template Pack then choose "BuddyPress Nouveau" from the list. Now save

The genesis of this is that the BuddyPress team are shortly to release version 3.0 of BP. The new theme was supposed to make it into 2.92, but somehow, this got missed owing to the theme not being fully completed. This provides much greater control over the BuddyPress layout than before and makes it look more modern - you can actually govern most of the settings from the Customizer in WordPress.

I'm using this on https://dev.phenomlab.com at present (development site).

I founded the Phenomlab technology and information security community in order to help anyone at any level understand how they can get the most out of technology, learn how it works, and better still, make the most out of security. Why not take a look ?
CISO / CIO in the finance sector, developer, technology enthusiast, and open source evangelist

@mcutting -- thank you for the awesome information about BP! I'm looking forward to the 3.0 release and will have to play around with the Nouveau pack. 🙂

First of all, you'll notice that the attachments show up as code in the BP activity feed. I think it would be great if the attachments actually show up in the activity feed, but I'd also be okay if they just didn't show up at all, creating the need for users to visit the thread to see it. If you don't want to show the attachment at all, maybe it could be replaced with a link to the post and some text to say something like, "click here to view attachment(s)".

Ok, we'll strip this in next version.

BP has its own proprietary avatar system. I would be great if you could sync user avatars into the BP system from wpForo. The true fix might be more of a third-party plugin that forces BP to use WP-based avatars much in the same way that wpForo already does. That way all avatars are pulled from WP core. Maybe gVectors could release a BP Toolkit for wpForo as a paid addon -- I'd happily pay for that! 🙂

Avatars are already synced. You should to switch to the Wordpress avatar in you Profile > Account page. Once it's switched wpForo will use BuddyPress avatar.

You can disable custom uploaded avatar for all users in Forums > Settings > features admin page. Thus all user will use the WordPress avatar and the BuddyPress avatar will be automatically synced.

You'll also notice that BP is reporting only 254 members, yet I have 8,070 users in wpForo and WP. Again, this may be a BP-specific issue, but just another great reason for a BP Toolkit from gVectors.

wpForo has no any relation to this issue. BP doesn't detect all users. Maybe it only counts users who have some activity.

wpForo BuddyPress integration is an Activity integration. Here is an example screenshots: 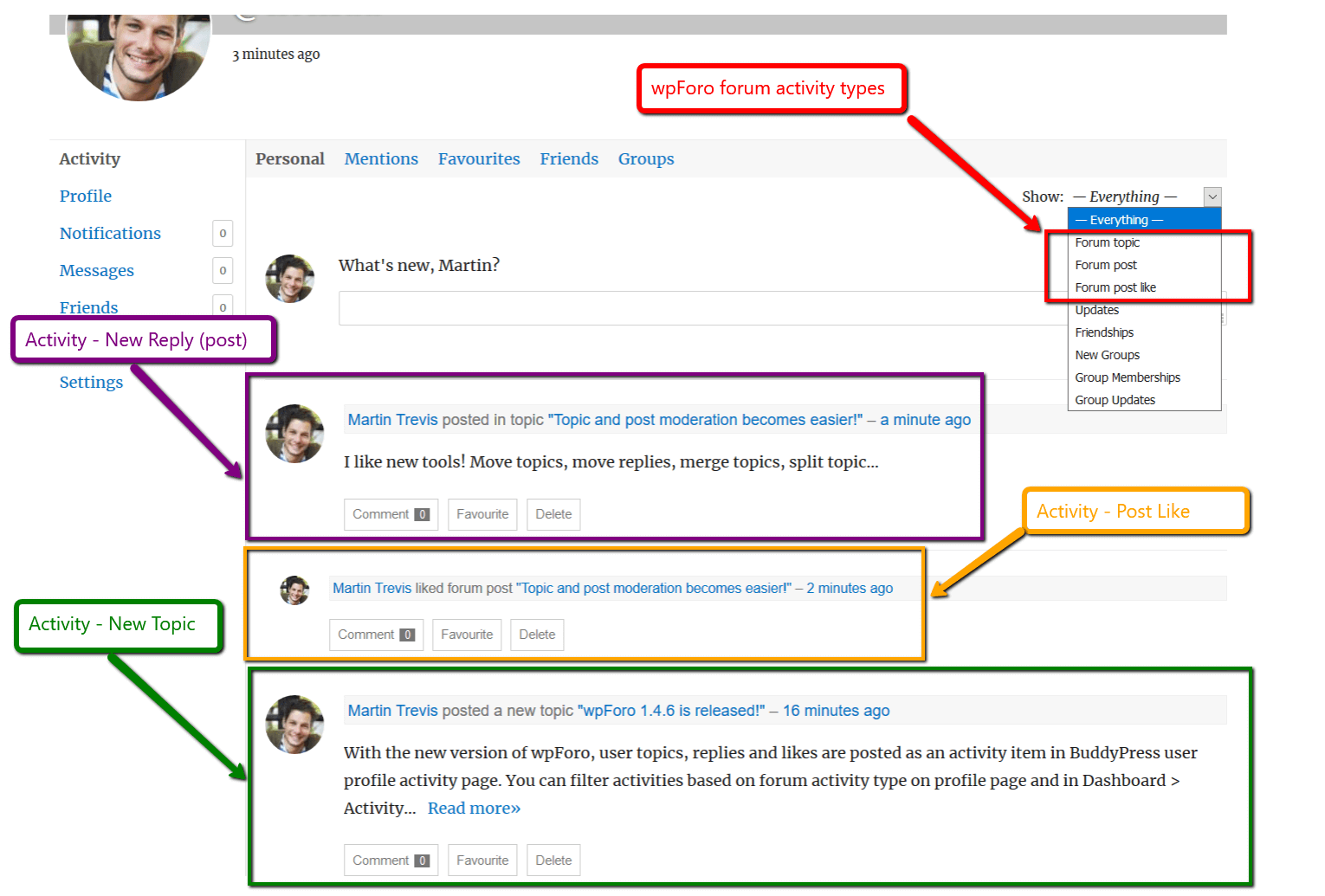 Avatars are already synced. You should to switch to the Wordpress avatar in you Profile > Account page. Once it's switched wpForo will use BuddyPress avatar.

Thanks Robert. But doesn't that mean all 8,070 users would suddenly lose their wpForo avatars because they'd be replaced by BP? That would be a bummer....

I realize some of these issues aren't wpForo's problem, but I guess I'm just hoping to make it all work. 🙂